Now extended to May 6!

One highly spirited wife is fun – but two is fertile ground for this smash comedy hit of the London and Broadway stages from the witty pen of Noël Coward. Meet cantankerous novelist Charles Condomine, re-married to Ruth but haunted (literally) by the ghost of his late first wife, the clever and insistent Elvira who has been conjured up by a visiting “happy medium,” one Madame Arcati. What’s a husband to do with such an abundance of riches. . .or troubles? Join the fun to discover how Charles gets the genie – or at least Elvira — back into the bottle!

This production is superb. -Daily Gazette

Many laugh-out-lout moments. ~The Record

True feast for the eyes. ~theALT

Special Events:
April 10 – Opening Night. Enjoy live music before the show, and a champagne (or ginger ale) toast and desserts from Bella Napoli after.
April 17 – Chef’s Table Night. Come hungry before the show and enjoy complimentary food from Yono’s/dp An American Brasserie and the music of Noël Coward performed by Byron Nilsson.
April 18* & 25 – Discussion Nights. Stay after the show and discuss the play with Producing Artistic Director Maggie Mancinelli-Cahill and members of the cast.
April 20, 27 & May 4 – Enjoy free Tarot and Psychometry readings 6:30-7:45pm. Included with your ticket for this performance, get into the spirit of the show by enjoying a reading by Lynne Kuber or Prudence Theriault.
April 29 – Go Behind-the-Scenes with Producing Artistic Director Maggie Mancinelli-Cahill and discuss Blithe Spirit and what goes into producing theatre at theREP.

*April 18 Discussion Night will occur prior to the performance – Story Circle presents True Ghost Stories with Kelvin Keraga (performing Adam and Eve and Pinch Me by A.E.Coppard and Siri Allison (performing The Ghost-Ship by Richard Middleton). 6:30 PM. Free and open to the public. 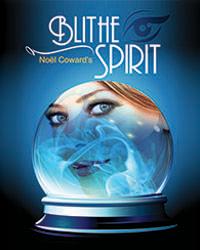