Holly Near’s music has been synonymous with social change activism for well over 45 years, for good reason. Now the iconic singer songwriter returns with a new collection of outspoken songs, performed with her trademark simplicity and wisdom.

The new songs dig deep into subjects like bullying, domestic violence and flood destruction in Puerto Rico. Still, there is a twinkle long identified with Holly’s view of life, as she brings laughter and tenderness to the human condition. For one, she delightfully rhymes “Coup d’État” with “Mardi Gras” and “menage a trois.” Plus fireflies, an old-fashioned front porch… then there is the voice, more powerful and clearer than ever. Plus, this night will be featuring two fabulous talents: TAMMY HALL (piano) and JAN MARTINELLI (bass), making for a powerhouse trio and guaranteeing a dynamite concert!

Born in Ukiah, CA in 1949, Near began singing in high school, including work with a local folk group. Later also an actress, that career brought her to seminal ‘70s television shows like “Mod Squad,” “Room 222,” and “The Partridge Family.” Our favorite bio-item: in 1970 she was a cast member of the Broadway musical Hair; and following the Kent State University shootings in May of that same year, the entire cast staged a silent vigil in protest. The song “It Could’ve Been Me” (which was released on A Live Album in 1974) was Holly’s heartfelt response to the shootings.

In 1971, she joined the Free The Army tour, an anti-Vietnam War road show of music, comedy. Organized by antiwar activist Fred Gardner and actors Jane Fonda and Donald Sutherland, it also featured Len Chandler and others.

From a colorful past and an open heart, with joy and passion and beguiling charm, Holly Near musically engages listeners in the world around them—speaking to anyone who believes in peace, justice and feminism – a wonderful spectrum of humanity.

TAMMY HALL, piano & vocals
“A musician who has much to offer in the way of originality, fine technique and a rich, emotional quality that is evident on everything she does. Her playing is warm and persuasive and a listener’s delight.”

MARIAN McPARTLAND, Piano Jazz
Her grandfather, one of the first Black projectionists in the country, showed her films of Fats Waller, Dorothy Donegan, Hazel Scott, Duke Ellington and Count Basie. These films, along with the music she heard on the radio, at church, and the r&b, soul and pop records of the time – even the incidental and theme music she heard on television – all influenced Tammy’s playing. These early experiences would form the triad of Tammy’s core sound: a fusion of Jazz, Gospel and Classical.

She has performed in venues and festivals including the Brussels Jazz Club and the North Sea Jazz Festival, Antwerp, France, Holland and Ibiza. Based in the Bay Area, she has worked with Connie Champagne, the Supreme Mary Wilson, the late David ‘Fathead Newman’, jazz violinist Regina Carter, Marcus Shelby, Holly Near, Melba Moore, Darlene Love, Queen Esther Marrow, Kenny Washington, the late Etta Jones and scores of others.

She has traveled extensively abroad in with such luminaries as Queen Esther Marrow; also with the Harlem Gospel Singers she has performed at Monterey Jazz Festival, Kennedy Center, Lincoln Center and Carnegie Hall.

She continues to work as a faculty member and mentor with several non-profit arts organizations making music and theatre accessible to under-funded inner-city children.

A native San Franciscan, Jan Martinelli (bass) has toured and performed with dozens of bands and artists at major festivals, performance halls and clubs throughout the country. Known for her stylistic range from Latin, Jazz and Funk to Blues and Folk, her soulful approach to the bass can be heard on more than thirty CDs and albums. Jan was an original member of the Bay Area’s popular Wild Mango, a seven-piece World Jazz ensemble. She appeared on the cover of Southwest’s in-flight magazine Spirit, in a feature article Women & Jazz, and has played major jazz festivals such as Aspen, Barbados, Monterey, San Francisco and the Kennedy Center for the Performing Arts.

Jan is currently a member of several Bay Area bands has been touring with Holly Near since 2012. 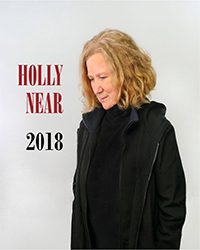