Who’s on first? It’s hard to tell when Jeff, a luckless but likable 27-year-old security guard, is drawn into a local murder investigation involving William, his tightly wound supervisor, who has been called upon to bear false witness to protect his troubled brother. When Jeff decides to reveal a big secret about the crime to his unrequited crush, an overzealous rookie policewoman, all hell breaks loose when she decides to tell her unscrupulous macho-cop partner. As Ben Brantley of The New York Times writes, “motives come in every shade but black and white.” Written by Academy Award®-winning (Manchester By the Sea), acclaimed writer, Kenneth Lonergan, LOBBY HERO packs a wallop, described as “smart, funny…a combustible brew of impulses.”

Accessibility
At theREP, we aim to make theatre accessible for all. For Lobby Hero, we are proud to offer four options for hearing-impaired individuals.

October 1: Opening Night
Stay after the show for desserts from Bella Napoli and champagne (or ginger ale) toast with the cast and crew!

October 12: American Sign Language Interpreted Show (3:00 p.m Matinee)
Watch as the show is also signed for our hearing-impaired patrons. This performance will feature a sign language interpreter. To request access to this section, please call our box office at 518.346.6204

October 16: Post-Show Discussion
Following Lobby Hero we will host a post-show discussion with  Maggie Mancinelli-Cahill Producing Artistic Director plus the cast of Lobby Hero. Stay around after the show to ask questions and speak to the cast.

October 20: Behind the Scenes
A pre-show discussion with Producing Artistic Director Maggie Mancinelli-Cahill at 12:30 p.m. and includes a light pre-show snack provided by 677 Prime. 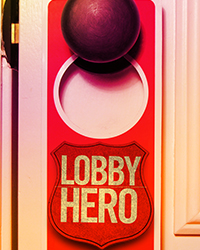