Group Sales Subscribe Share Save
Friday, January 27, 2023 to Sunday, February 19, 2023
Written by Jenny Stafford
theREP welcomes audience ages 5+, with the recommendation for this production of ages 18+
90 minutes with no intermission

Is a lie always a lie? Can it be a defense against hurting another person? Can it be a means to ensure the greater good? Married couple Kate and Ben, she a workaholic ethics professor and he an unemployed programmer, have invented the perfect game for getting to the truth and nothing but the truth. “Secret hour,” is their time to share only the truth and no lies. When an automobile accident unexpectedly reveals Kate’s deepest and darkest secret, her marriage spins out of control.  Jenny Stafford’s play, winner of the 2021 Next Act! New Play Summit, is a delicious adult puzzle about sex, lies and the games we play to keep life moving along on cruise control and what happens when the forces of the universe– or at least human nature– make sure we take the wheel and keep our eyes on the very bumpy road ahead!

SECRET HOUR IS PART OF OUR 22-23 SUBSCRIPTION SEASON.

Behind the Scenes – 1 p.m. Sunday, February 19
12:30 p.m., complimentary coffee and pastry before the pre-show presentation of the special effects behind Secret Hour, hosted by Producing Artistic Director Maggie Mancinelli-Cahill. This special conversation is free and open to the public. 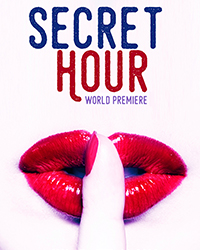