event is free, tickets are required. CLICK HERE TO RESERVE YOUR TICKETS.

Presented in partnership with the New York State Writers Institute.

Sharr White is the author of The True, a new play that explores the bounds of love, loyalty, and female power in the male-dominated world of Albany “machine politics.” The play portrays political operative Polly Noonan and her relationship with Albany’s “mayor for life,” Erastus Corning 2nd, as they wage a battle for control of the city’s Democratic Party against upstarts and progressives in the 1970s. Directed by Scott Elliott, the 2018 off-Broadway premiere of The True starred Edie Falco as Polly Noonan. White’s Broadway plays include The Snow Geese (2013), starring Mary-Louise Parker, and The Other Place (2012), starring Laurie Metcalf and Daniel Stern.

Maggie Mancinelli-Cahill, Producing Artistic Director of Capital Rep since 1995, has worked on and off Broadway and in numerous regional theatres, directing more than 100 productions. She is the recipient of the Norman E. Rice Award for Excellence in Arts Education, Distinguished Leadership Award from the National Chamber of Commerce, and was named a Woman of Excellence by the Albany-Colonie Chamber of Commerce.

All attendees will be required to wear a mask and provide proof of vaccination.
Click here for updated Covid protocols 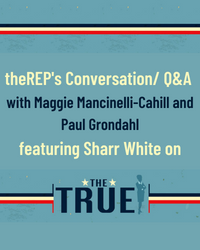