BY GORDON GREENBERG AND STEVE ROSEN

Ever wondered what would happen if you took Bram Stoker’s legendary vampire tale and put in into a blender with the comedic influences of Mel Brooks, Monty Python and the 39 Steps? That’s just what happens in this lightning fast, laugh-out-loud 90-minute gender-bending, quick change magical romp.  Famed female vampire hunter, Jean Van Helsing, and her motley company chase Count Dracula from the English Countryside to Transylvania to “other frightening places.”  Their antics, complete with loads of local and pop references, brim with enough tongue-in-cheek mayhem to fill your cup of giggles.

Capital Rep Associate Artist, Gordon Greenberg and co-author, Steve Rosen, have brought their brand of zaniness to other literary classics, including Ebenezer’s Big Christmas Show, based on Charles Dickens’ A Christmas Carol for The Old Globe and Buck’s County Playhouse, The Secret of My Success for Chicago’s Paramount Theatre and Crime and Punishment: A Comedy, now being developed at The Old Globe. Greenberg, who has directed eleven productions for Capital Rep, also directed the acclaimed Olivier-Award nominated production of Guys and Dolls on London’s West End and co-wrote and directed Holiday Inn on Broadway.

Dracula: a comedy of terrors is part of our 22-23 subscription season. 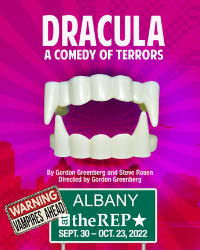